The Renessanse Consort is based in the small town of Tønsberg (100 km southwest of Oslo), and this Consort has given Early Music conserts for many years.

The repertoire spans from the middle ages to the baroque. Improvisation and spontaneity are important elements in these styles of early music, and in its efforts to let this music come alive, Renessanse Consort also uses these elements. The group tries to recreate the sound of this early music and has a great range of period instruments. Several of these are built by the members of the consort.

Renessanse Consort is renowned for its versatility, and present programs where sound, instrumentation and style varies, in order to give the listeners an interesting and varied experience. The members also give informations and tell anecdotes about instruments, composers and the music. 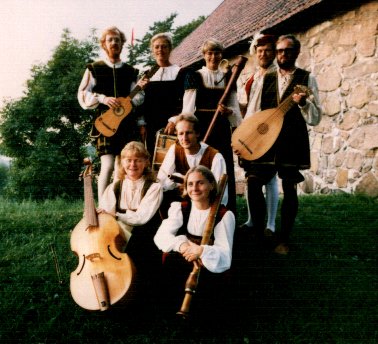 Renessanse Consort was founded during the seventies, at least before 1976, by four friends - Tove and Kåre Lie and Liv and Bjarke Anderson - who enjoyed singing and playing guitar and recorders together. After some time our interest focused on early music, and we started with regular rehearsals on a more serious amateur level.

Others joined the group, and we acquired better instruments, lik lute, viol, cornamuses, crumhorns, harpsichord, a small organ, etc. Several of these instruments were built by members of the consort. Our ambitions grew and we began giving concerts - first locally, but later over a larger area of southeastern Norway. After some years members of the consort made period costumes for everyone.

In addition to a stable group of core members, Renessanse Consort often cooperates with singers, choirs or dancers. The frequency of conserts varies from a consert every second years to several conserts a year.

The years bring changes. We have discarded the costume show, members come and go, but we work continuously to better the musical standard. Here is the latest photo of the group: 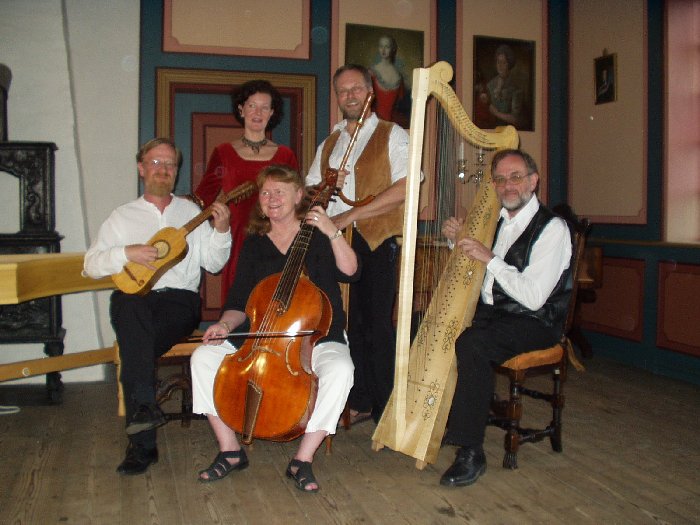 Renessanse Consort is playing music from medieval to high baroque. But mainly we focus on the time from the end of the 16th to the end of the 17th century. This was a time of transition from renaissance to baroque, an exciting period with lots of beautiful music. Here are melacholy and humorous English lute and consort songs, here is English / North German / Danish ensemble music with beautiful melodies and harmonies, here are spirited Spanish and Italian dances, here is elegant French chamber music and highly dramatical Italian pathos - just to mention a few musical styles of that time. We try do do our part to make this magnificent music better known.