The Songs of the Vikings

The book is published by Midgard Historical Center, and you can order it from this address: info@midgardsenteret.no

Here is a very short version of some of the main points of this book: 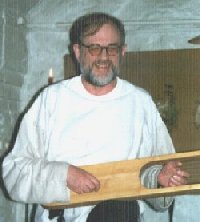 Did the Vikings sing?

If so - what did they sing? And what about music - which instruments did they know?

There are lots of questions, and sad to say - we do not know as much as we would like to know. Some hints and some fragments exist, and we will pick them up and try to compose a picture of what the Vikings' songs may have been like. But the sources are rather late and far from sure, so therefore there has to be some element of interpretation and guessing in any attempt to recreate the songs of the Vikings.

Do we at all know if the Vikings were singing? Adam of Bremen lived around the end of the Viking age. He did not himself visit the heathen festivals at Uppsala, but he told that the Swedes sang songs at the sacrifices, and those songs were so indecent that he would say no more about them. In the Laxdoela Saga we read about a man, his wife and sons who sang magic songs, dangerous, but beautiful songs. And in Eirik the Red's Saga we find a volve (female seer) who sang - but she needed assistance from another woman who also knew the song. Did they sing a song in two parts? Maybe. But not necessarily - the second woman was perhaps necessary as a helper, to sing the volve out of her trance. But we may note that in all these cases several persons were present and presumably doing the singing.

Neither Adam of Bremen nor the sagas give any music. How then were the tunes? In the Viking age our modern music notation had not yet developed. The only ones who recorded tunes, in a very early kind of notation, were men of the church in Europe. And only when Christianity came north, after the end of the Viking age proper, do we get any tunes.

Some such tunes are found at the magnificent St. Olav cathedral in Trondheim. But these are of the common European medieval kind (Gregorian), and show no influence of any special northern song tradition.

The second largest medieval church built in Norway, was the St. Magnus church in the Orkneys. The church was inaugurated in 1137, and then the Magnus hymn may have been sung for the first time - although the oldest known manuscript dates from 1280.

The Magnus hymn is radically different from European church music at that time. It is written in two parts which follow each other in parallel thirds. The major third was regarded as a dissonant interval at that time in Europe (probably as a consequence of the then prevailing Pythagorean tuning, which gives pure fifths, but very nasty thirds).Obiously this was not the case among the Northern peoples.

The Magnus hymn in modern transcription.

The English writer Giraldus Cambrensis who lived at that time, also tells us that two part singing was common in the areas that had been settlede or influenced by the Vikings, but unknown elsewhere, so that he regarded this custom as a legacy of the Vikings.

Is this a clue? Was the major third important in the singing of the Vikings?

Years go by, and the sources are silent. The Viking age and its tradition disappear in the mists of history, and language, music, thinking and traditions change all over Scandinavia.

But in Iceland the language of the Vikings live on, with only minor changes. And in Iceland we find our next clue. 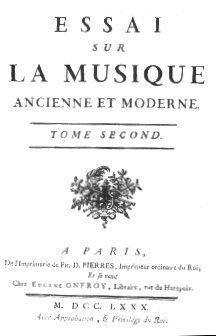 Or rather, in Paris. The year is 1780. J. B. de la Borde publishes a book called "Essai sur la Musique Ancienne et Moderne". In this book is printed 5 tunes to Old Nors texts - "as they today are sung in Iceland" - he says. His source is the Danish-German musician Johann Ernst Hartmann who settled in Copenhagen in 1762, and we may presume that Hartmann learnt the tunes from Icelanders who visited what was then also the capital of Iceland.

There are tunes to verses from Voluspa, Havamal, two bardic poems and to the Christian medieval poem "Lilja".

1780 is a far cry from the Viking age. How authentic could these tunes be?

Strangely the first three of these, the tunes to Voluspa, Havamal and the Krakamal seem in essence to be the same tune. They all are built over a flexible song formula which with minor variations are adapted to different metres. Such a song formula that can be adapted to almost any text, may well derive from ancient oral traditions. And even more strange - these tunes seem to circle around the major third. This is the central interval, and the tunes only go one note above and one below this third, so that the entire range is a fifth.

This characteristic feature, that the tunes largely are built around a major third, can also be found in another Scandiavian periferic district, the Swedish parts of Estonia. And we know from other contexts that just these kinds of periferic areas often preserve archaic features better than the more central areas do. 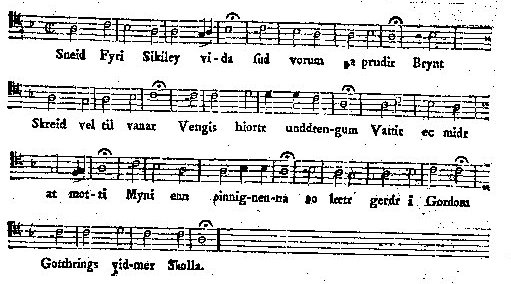 The fourth of the de la Borde tunes, a tune to a poem by the Norwegian king Harald Hardrade, is different. It does not start and end on the major tonic, as do the previous tunes, but on the third. It almost cries for a second part in parallell thirds, and if we add such a part - in the same style as the second part of the Magnus hymn - they sound well together. Did the Vikings spontaneously improvise second parts in parallell thirds? 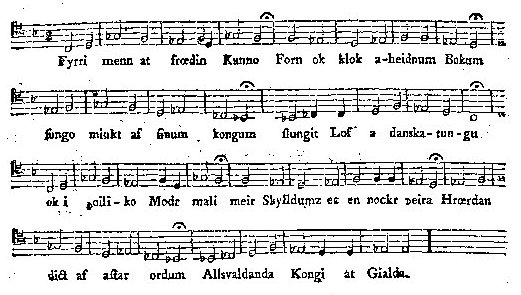 The fifth and last one of the de la Borde tunes, "Lilja", is very different. With its Greek sounding scale this haunting melody might well have been a "souvenir from Byzantium", brought home by some far ranging Viking.

From a medieval Danish source we find still another tune: "Drømde mik en drøm i natt".


Which musical instruments did the Vikings use?

Sagas and poems mention harps, and these may have been small triangular harps. But more probably they were the instrument we call lyre. There were found traces of a lyre in the Sutton Hoo ship, some time before the Viking age, and we can find it in medieval wood carvings in Norway, shortly after the Viking age. Archeologists have also found different kinds of flutes and other wind instruments. But the main instrument may have been the lyre, or "harp". 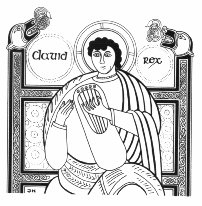 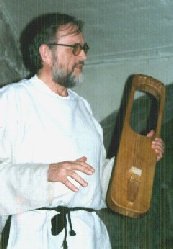 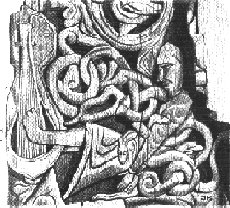 Left: King David with his "harp", Anglosaxon book-illustration, 8th century. Center: The lyre. Right: Gunnar in the snake pit plays his "harp" with his toes. The "harp" is a lyre with curved outline, standing upside down.

We do not know exactly how the lyre was tuned or played, and we do not know if it was used to accompany songs. 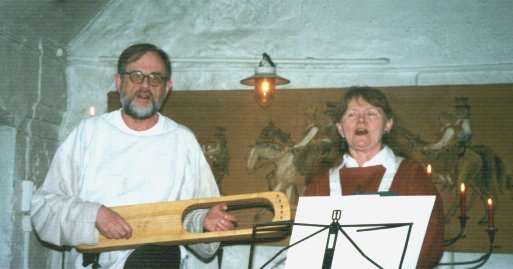 Performing a Viking song to the lyre.

But based on all these elements one may do some reconstructions, and although there admittedly is a large element of guessing and interpretation included, this is probably the best approximation to "real" Viking music that exists.My wife Tove and I have performed these songs at several occasions, as you can see in the photos. 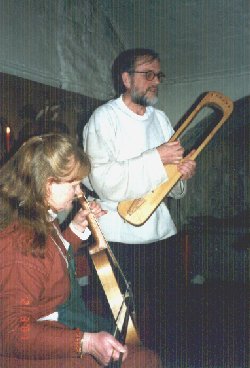 Singing to the lyre and medieval fiddle.