Here follow a few chapters from my book Prinsen som våknet (The Prince who woke up), translated into English by the author. I usually only translate into my native language, and apologize for this provisional translation.

Gautama had a refreshing bath in the river, and then he enjoyed the food that Sujata had given to him. Now he felt fit and strong. And there would be a full moon tonight, yes, it even was the Vesak full moon night in the month of Vesak (May), his birthday! He was thirtyfive tonight. Maybe that was a good omen? Maybe he could find the answer if he made some extra effort tonight?

He spotted a big tree. Strong branches spread out to all sides from the thick and gnarled stem, an the thick foliage somehow formed a roof over the soft forest floor. This must be a good place to sit!

Gautama made a pillow from grass and straw, and sat down at the root of the tree.

"I'll sit here until I find the answer, no matter what happens!" he thought. "Let happen what may -- either I find the solution, or I will remain sitting here until I fall dead to the ground from hunger and thirst!"

The sun approached the horizon, and darkness fell. No, it was not quit dark after all, for now the moon was rising above the tree tops, spreading its mild light over the wood.

What was that!? Was there a sound in the bushes over there?

Gautama gave a sudden start. He almost jumped up from his seat, but then he stopped.

"I'm afraid!" he admitted to himself. "But the fear is something inside of me. There is no use trying to run away from it! Let me instead just sit here and see what happens!"

And so he forced himself to be brave, to just sit quietly and "feel" how it felt to be afraid. Oh, well, it was only the wind rattling the leaves, so there was no danger after all. After a while he felt that the fear was gone. Now he had learnt something about himself.

Gautama sat. He "saw" how thoughts and feelings appeared in his mind and disappeared again. He sat there in deep concentration. The minutes became hours. Now he was haunted by ugly and bad thoughts and feelings. They were so vivid that he felt surrounded by fierce and terrible monsters. That poisonous green snake hissing against him - that was hate! And that fat toad slurping and snapping at him - that was greed! The monsters seemed to roar, hiss and claw at him, trying to scare him away.

Gautama was trembling, and sweat was running down his brows.

"You are nothing but my own fantasies!" he shouted. "I have seen through you!"

Suddenly everthing was quiet. The frightening monsters disappeard as if by magic. But ... what was that? Suddenly Gautama thought he heard horns and trumpets, and he saw an old king approaching. Was it ... was it ... father? The king held a golden crown in his hands, and reached forward to Gautama. "Take this crown, Gautama," he said urgently, "and become the most powerful king in the world!"

Gautama gave no answer, because he understood that this could not be real. He just sat there. The king lifted his hands again, as if wishing to hand over the crown. But suddenly he became transparent and lost his contours, and then he was gone.

All of a sudden Gautama heard merry dance music, and was surrounded by beautiful ladies. They all looked like Yashodhara, and they were dancing, smiling to him and waving: "Join us ... come here ..."

Oh, if he only could join them in the dance! It was really tempting ... But Gautama understood that these beautiful ladies were no more real than the fierce monsters or the old king had been.

"You too are nothing but my own wishes and fantasies!" he exclaimed. "I have seen through you all!" 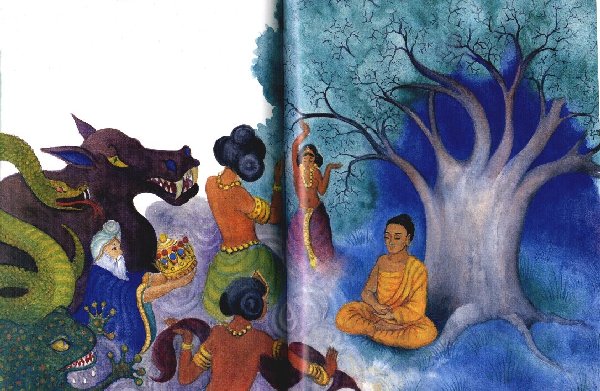 Suddenly everything was quiet again. All the visions disappeared, and the forest was quiet and peaceful as before, with moonlight sprinkling down through the branches of the large tree. The difficult struggle was ended. Gautama understood that he had conquered himself. He had overcome bad thoughts, hate, greed and longings in his own mind.

Then something strange and wonderful happened, something that is difficult to describe in words. It was as if he had been sitting inside a dark room all his life - and then suddenly the walls fell down and everything was bright, so that he could see clearly. Or as if he should be sitting on a high mountain with a fantastic view to all sides.

Anyway, Gautama all at once felt that he could see and understand everything that had been so difficult and unclear for him. He looked back in time, and could see how all living beings are born, live their lives and die, are born again and die again, in endless sequence. He looked back and saw what he himself had been before. Then he understood how much suffering there is in the world.

He saw and understood what the world was, what he himself was. The deepest secrets of life and death lay open to him. A smile appeared in his face.

He looked into himself, and saw that greed, hatred and ignorance were the roots of all that was bad. But as he realized this, he felt that the greed, hatred and ignorance suddenly disappeared. He was free! Totally free! Then he knew that it is possible to be free of all suffering. And he understook how this could be done, how it was possible to be free of all sufferings!

Gautama felt more happy and joyful than he ever had thought could be possible! He felt the joy surging as a mighty river throug all of his body and out into his fingertips. He had done it! This was what he had been looking for! He was free!

This feeling was so strong and so overwhelming that it felt like waking up from sleep. Like a sudden awakening. As if he somehow had been asleep all his life until now, and only now was awake and able to se things as they reallye are.

Gautama had become a Bbuddha, for the word "buddha" means "awakened".

The Monk Who Fell Ill

Once a monk fell ill. He got dysenthery, an illness that makes you go to the toilet all the time. But this made him so weak that he could not stand up. He just was lying on the floor of his cottage, and he could not even go to the toilet. The Buddha went from cottage to cottage together with his good friend Ananda, and came to the cottage where the sick monk was lying. When the Buddha saw him lying there in the middle of a stinking pool of his own filth, vomit and urine, he asked:

"I have got dysentery, Master."

"Is there noone to help you?"

"Why don't the other monks help you?"

"I have done nothing for the other monks. Therefore they don't help me."

The Buddha turned to Ananda, and said:

"Fetch some water, Ananda. Let us wash this monk!" 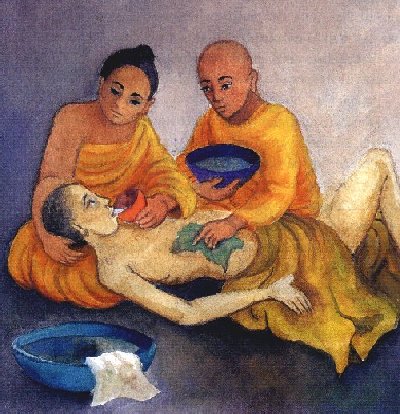 Ananda brought water, and together they washed the monk. Then the Buddha took hold of his shoulders and Ananda took his feet, and they lifted the monk and put him to bed.

This made the Buddha summon the monks to a meeting.

"Is there not a monk who is ill in one of these cottages?" he asked.

"Yes, Master, there is", the monks replied.

"Do you know what is ailing him?"

"Is there noone who helps him?"

"Why is noone helping him?"

"He has done nothing for us, therefore we don't help him."

"You have no mother or father to care for you, monks," the Buddha said. "If you don't help each other, who shall then help you? Those who want to help me, shall help those who are ill, monks."